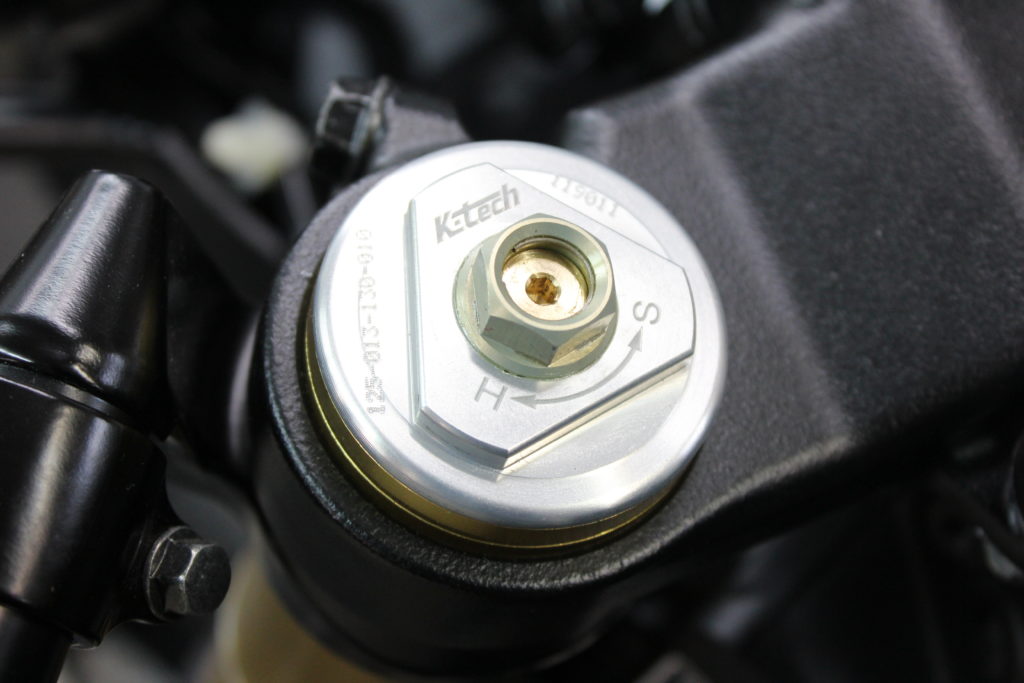 We had a question from a fellow rider planning on racing his 05’ 600’s in amateur class.  He had a concern of a very high advertised compression ratio, in the neighbourhood of 13.5:1 and mentioned he read something about a top out spring in the fork and wondered what the heck was that?

To address the first part of his question, he wanted to know if I thought he needed to run race gas with a compression ratio (CR) that high.  The short answer to this question is no, although 13.5:1 is very high, he should be able to run this thing on premium pump gas.  It is just within the last 4-5 years that I have noticed OEM’s starting to request Premium fuel in a few of their higher end performance models.  Even more recently a couple of OEM’s have suggested Race gas in their motocross models.  They state that these bikes are sold as race bikes with little or no warranty.  I have yet to have seen this request on a ‘road’ bike, other than of course Yamaha’s TZ and Honda’s RS series of pure race Grand Prix bikes.

The requirement of Race Fuel is based on many things, although CR is among the leaders, engine load and rpm expectations and bore size also come into play.  The smaller bore size of a 600 can get away with more compression before detonating than can say a 1000.  You will see 1000’s probably top out at a more modest 12 or 12.5:1 as a peak pump gas CR.  Anywhere above these numbers and you need to seriously consider Race Gas.  Race fuels are used by most professional road race teams for a number of reasons.  The primary reason is of course protection, the factory built motors have been optimized in the area of piston to cylinder head clearance, overall compression ratio and ignition timing, all these things invite detonation under heavy load, and Race gas protects against detonation.  Secondly, is performance.  Race fuels are designed to protect against detonation, not add power.  They allow the engine builder to assemble a more radical motor that would otherwise not survive on pump gas.  However… having said that, a few race fuels out there will add horsepower, even to a stock motor.  I have seen Nutec and Elf for example add 2-4 horsepower across the entire rpm range to a stock engine just from pouring it in.  If you have ever priced engine modifications, the price of race gas isn’t so bad a deal if you are just using it at the track.  The final reason teams will settle on a race gas for the season is consistency.  In this current age of fuel injection, most of the production based street bikes being campaigned in the National Superbike series across this country are using some method of fuel injection mapping software.  The bikes are built and tuned in the race shop for their peak performance, and then mapped very carefully to the race fuel.  The team can then go all the way to Calgary at the foot of the mountains, or out to Nova Scotia just above sea level and not have to worry about local fuel quality or availability and they know their mapping will remain consistent.  This is currently very important as the Canadian National Road Racing series is enforced by the Dynojet rear wheel Dyno.  So, having made a short answer long, I would rather suggest to this amateur that he put his limited budget toward tires.  The bike he is purchasing, if geared properly, will be one of the fastest on the grid in stock trim, but if he has the extra cash and wants a decent power gain across the board, he can definitely benefit from a few drums of ELF.

The second part of his question involved top out springs (TOS).  All modern OEM style forks offered from KYB (Kayaba) and Showa, the two main suppliers to most of the big volume manufacturers, use top out springs.  These are small springs that reside inside the forks to resist the very top part of the forks stroke.  They can be as short as 75mm or as long as 200-300mm (OAL, not stroke), depending on their required effect.  The main function of these springs is to provide a cushion or deceleration to the very top of the forks travel.  Just imagine how distracting, not to mention damaging, it would be if every time you opened the throttle in the lower gears the forks made a big mechanical clunk just as you wheelied.  The TOS also helps the fork track better over the bumps while hard on the throttle.  Most of you are probably aware as to how adjusting the preload affects the static and dynamic sag of the motorcycle.  If you add preload front or rear the bike will sit higher in it’s suspension stroke.  In much the same way the OEM’s have chosen the top out spring for your bike to help the front end sit statically in a certain spot.  This may help them (with a longer TOS design) to maintain an initial desired rake and trail, depending on the intended purpose of the motorcycle.  If there were no TOS, it would just be you and the bikes weight against the fork spring and the fork would be fairly stiff all through its travel.  Now, with a properly selected TOS, the fork will act softer in the upper part of its travel, allowing you to comfortably run a stiffer spring that will perform better at higher speeds down deeper in the forks travel.  This is even more important as stock spring rates have climbed fairly high in the last few years.  Another consideration is that Top out springs make a straight rate spring act more like a progressive rate spring.  A straight rate spring in this instance is a typical wound coil spring with uniform coil thickness and spacing from top to bottom, (other than where the last ‘dead’ coil is ground flat to provide an even surface for the spacer or retaining system).  Progressive rate springs can have two or more rates incorporated into one spring, these springs can be recognized visually by the change in spacing of the coils near one end.  This changing spring rate will allow a soft supple action in the first part of the spring’s compression, ramping up to a more aggressive rate deeper in the springs travel (sound familiar?).  This gives smooth, softer compliance over the bumps, leaving the rider and chassis less distracted, yet the stiffer coils control the big chassis dive caused by higher cornering speed or during heavy braking.  Although progressive springs are still used extensively in some applications, typically the TOS combined with a stiffer straight rate spring seems to be the direction of the future.