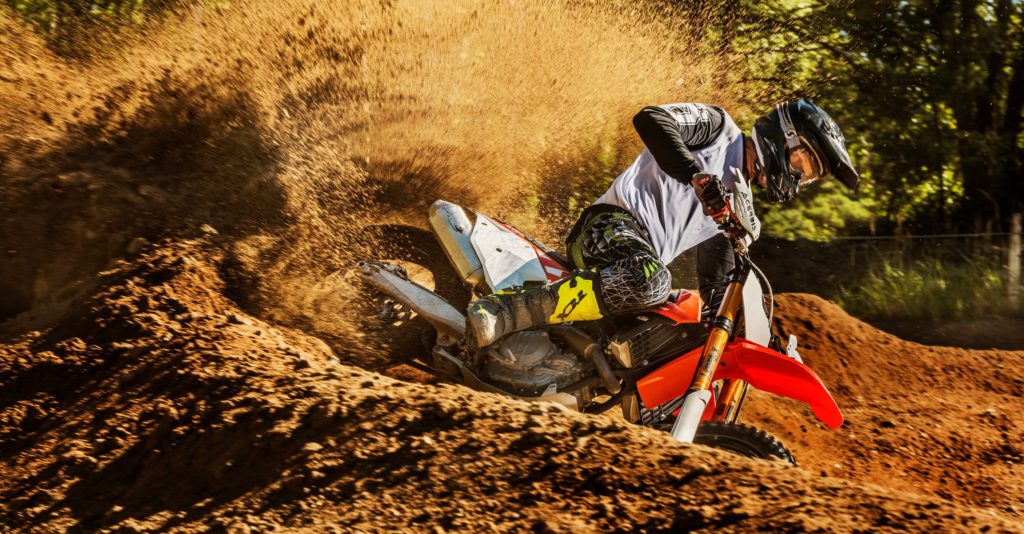 My dilemma is this, you buy a bike – it’s great – you’re a fairly competent rider – why are guys on lesser machines beating me down the trail?  Why are they not struggling against their bike like I am? As I get older I realize that it’s not the $2000 in mods to get an extra 6-7 hp out of a 400cc mill that is going to get me down the trail quicker…it’s my ability to control and keep up-right a bike that can be described as “top-heavy” at best.  Add to that I want my bike to perform well on the road as well as in the dirt. My bike is a ’07 Suzuki DR-Z 400s. I weigh in at about 190 with gear.  I have had bikes in the past but never have I had to fight like this to make this thing respond to my input.  When riding in the dirt the front end wants to wash out on a regular basis. Going through slightly banked loose corners the front wheel just wants to climb the burm instead of turning.  Ruts and sand are a nightmare – So much so that I have sublimated both shoulders muscling this thing around – its time I got this thing set-up. I’ve done lot’s of “research on this” and the conclusion I have come to is that I need front springs and valves. The rear spring is apparently capable of handling my weight, skill and terrain.   Thanks, John.

Dear Fred, Thanks for taking the time to write in.  The problem you are describing is quite common and may normally be caused by a few different things, but you have narrowed it down to describe exactly what is going on, let me explain.  To cut to the point, the front end on your DRZ is just plain too soft!  As with any dual-purpose motorcycle, the engineers are trying to strike a balance between comfort and performance, which is tricky to do between a street and road race bike, let alone between a street and dirt bike.  The suspension has been given plenty of travel to absorb bumps, which helps in the dirt, but isn’t needed on the street.  This added soft suspension travel in your case is pitching the bike around front to back just too much for your elevated ability in the dirt.    Stiff motorcycles as a rule change direction quite quickly and easily.  The reason for this is a little complicated and can be explained best by the analogy that a softly sprung or softly damped motorcycle will absorb and dampen your handlebar inputs more than a stiffer bike. Imagine peeling through a fast left in the woods, with a sharp right coming up.  When you shove on the handlebars to initiate the turn, the bike has to go from one lean angle through straight up and down, only to flop down on its other side in response to your request for the upcoming corner.  If the bike is stiff, less motion and energy will be absorbed by the forks during this angle change, it just responds to your request.  If the bike is under damped, you have to push harder on the bars to get the same reaction, and then the springs absorb your inputs to the bars, causing the bike to dive into the fork stroke deeper than it needed to (here is the source to the top heavy feel).  Then as you pass the straight up and down phase and the bike starts to drop onto it is right side, things get tricky.  You are still inputting force to do the initial direction change and at the same time the under damped forks rebound (pop up) trying to recover to their original position.  This causes you as a rider to have to overcorrect approaching the second apex all the while trying to guess at what rake and trail configuration the bike is going to settle on for the corner.  This combined with your compromised body position is what causes the bike to miss berms on the exit.  You can imagine this takes a ton of extra energy from you physically and is overly taxing mentally too.  Both the steering damper effect of initial input resistance, and the overcompensating required to correct for the pop are what wears you out after riding for an hour fast through the woods. As you can imagine, having a front end that is sprung too soft also throws the static balance of the bike off too, putting far too much weight onto the front wheel.  This is why ruts and sand are a nightmare, the front end just digs in too much as it is carrying a disproportional amount of the bike and rider’s weight.  Imagine when the front is riding too low from the soft springs, you slide farther forward greatly exaggerating the overloading as your (you and your bikes) combined centre of gravity moves farther forward still.  Even when driving in a straight line the forks end up working way too far down in their stroke, which has a few adverse effects.  First off, the forks aren’t giving you much bump compliance as the springs are wound way up, you are real close to the bump stop and the air gap in the top of the forks is compressed too much, making the fork feel way too stiff when in reality it is too soft.  Secondly, when the fork is deep in the stroke, you have lost a significant amount of rake and trail which gives you a very unstable, nervous bike that is twitchy and confidence sapping.  So, you can imagine even going straight wears you out and is killing your shoulders. So, if you stiffen the spring rate on the forks up and set the fork oil level properly, it will feel much softer while working better through the bumps, and the balance of the bike will improve helping it track straight and smooth through the rough and the ruts.  If you stiffen the damping on the forks up, it will really help settle the bike down through the twisties, greatly increasing your speed and confidence.  It will be way less effort to ride, improving your safety and most importantly your enjoyment of the bike.